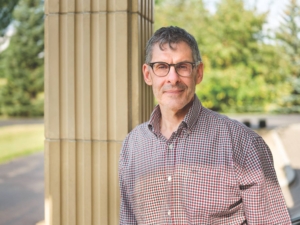 Throughout 2019, Calgarian Jim Fiorentini underwent a series of operations and tests after finding a lump on his lower back, which turned out to be malignant. While the initial operations were successful, further lesions found in the late summer and early fall pointed towards the spreading of merkel cell carcinoma — a rare and aggressive type of skin cancer.

When exploring treatment options, Dr. Jose Monzon, Fiorentini’s oncologist at the Tom Baker Cancer Centre, found that Fiorentini was a fit for a phase 2 immunotherapy clinical trial Monzon was leading. Fiorentini decided to move forward with the trial, and is currently on 22 of 24 cycles of immunotherapy, which have shrunk the lesions throughout Fiorentini’s body effectively. He shares his story here:

When Dr. Monzon  — and I remember this just like yesterday — asked me if I was interested to know what my prognosis was if I did not receive any treatment, I told him ‘no’ because I intended to fight this thing. I thought, ‘Alright, now I have a challenge in front of me. I’m not going to let the challenge beat me. I’m going to do what I can to fight, and then we’ll see what happens.’

“It was determined that I was a candidate for the immunotherapy program [clinical trial] as the best course of action. So, it was just days before Christmas 2019 when I received my first injection cycle of immunotherapy.

“The epiphany occurred when there was another lump. I asked Dr. Monzon if I should have it removed, and he said, ‘No, we’re going to use that as a gauge to see if the immunotherapy is working or not.’

“For a number of cycles after, I avoided touching that area or even investigating the lump on my own. And lo and behold, when I went to have a check-up with Dr. Monzon, that lump had disappeared, and I hadn’t even realized it.

“There was a progression. These reductions just didn’t happen overnight — it took a number of cycles. But we could see the slow retraction of these lesions, to the point where most of them, if not all of them, were no longer detectable.

“[This clinical trial] means I have more time with my family. It gives me hope that I can live to be a little older than I am now. I can hopefully share my experience and provide some comfort and hope for those who are going to follow.

“I can only hope that my small contribution will help people who would have to suffer through this in the future. It makes me feel good that I get to be a part of this — to help and be a contributor in some small way. It’s a wonderful feeling.

“I think my wife said it the best – sometimes God puts us on this Earth for a reason and maybe, it’s possible, that this is the reason why He put me on this Earth — to help.”