GEDfest is a celebration of the impact Gordon Edgar Downie of the Tragically Hip had on Canadian culture and music. Behind the music, dancing, and good times had at this event is a purpose. For Keith, the organizer of GEDfest Calgary, the purpose is to ensure better outcomes for Alberta’s cancer patients.

“It is meant to be a celebration that brings the community together under the spirit of live music and charity.” – Keith Dyck, organizer of GEDfest. 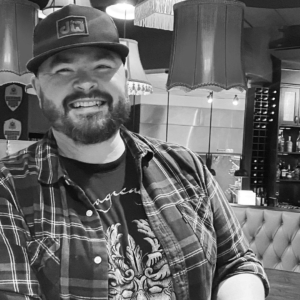 Gordon Edgar Downie, the lead singer of the Tragically Hip, passed away from Glioblastoma brain cancer on October 17, 2017. Each year since, on the closest Saturday to October 17, GEDfest takes place to support a cancer charity. With tribute bands, like Trickle Down, playing hits by the Tragically Hip and conversations brewing about the Gordon Downie’s impact on Canadian culture and the cancer community, this event is a time to reconnect and take part in a good cause.

Keith’s first glimpse at the care provided at the Tom Baker Cancer Centre came when one of his dearest friends, Terry, was diagnosed with stage 4 lung cancer. 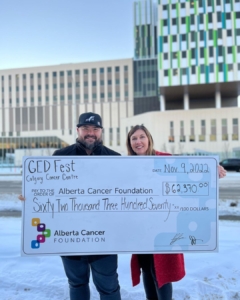 GEDfest founders, Keith and Julie, and the funds they raised for the Calgary Cancer Centre.

When asked about Terry’s journey, Keith responded, “Through his battle with cancer, he talked about the Tom Baker Cancer Centre, the care he received there, and how amazing it was. He was given six months to live, and nine years later, he is a healthy, robust and beautiful man at 74. [Terry] would say, outside of his oncologist, the Tom Baker Cancer Centre saved his life.”

With the new Calgary Cancer Centre opening up in 2024, Keith saw an opportunity to help advance cancer care for Albertans.

“The Calgary Cancer Centre opening, we certainly want to be a part, albeit a very small part, of seeing that across the finish line.” 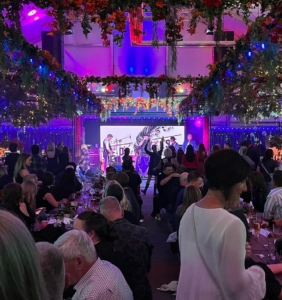 When asked what OWN.CANCER means to him, Keith explains, “It is about community ownership… it is up to all of us to OWN.CANCER.”

It is certain that GEDfest brings the community together, all in the spirit of taking back the power cancer has over us. We are grateful for the support GEDfest has provided to the OWN.CANCER campaign and the Alberta Cancer Foundation in years past. It is clear to see the positive impact it has on our Albertan communities.

Here is how you can support GEDfest:

“Music brings people together. So my function in anything I do is to help bring people closer in.” – Gordon Edgar Downie 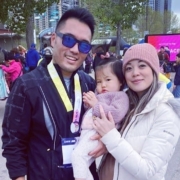 How Sam Kwong is helping us own cancer 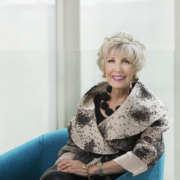